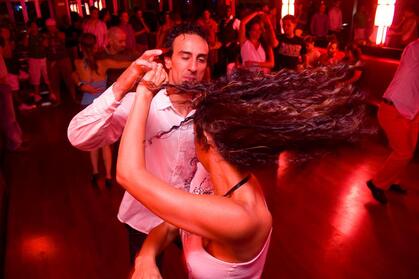 Carolina started dancing Salsa in 2003 and fell in love with it.  She grew up with salsa music in Venezuela but was introduced to a more technique oriented and challenging style upon her move the Portland area. She quickly started taking every single group and private course available and started performing in all the different performance classes that were offered. She performed with two different all women's salsa teams, the Portland Salseras and Seduced by Clave.  Carolina started teaching with her dance partner Jamal under the company name Ritmo Del Alma in Vancouver, WA.  Ready to increase her talent, she moved to New Jersey to train and perform with Caribbean Soul Dance Team. She has performed with the Caribbean Soul Dance Team on some of the biggest salsa stages in the world including the LA Salsa Congress and the NY Congress.  She has a great passion for teaching and loves to see each student grow and do things they initially thought impossible.

Jamal Rahima, Co-Owner, Co-Founder
(Instructor: Salsa, Bachata, Kizomba, Cha Cha Cha)
​
Jamal started dancing Salsa in 2002 in Portland OR.  He was a natural athlete, growing up playing sports and studying martial arts. Although he had never danced before, his awareness of his own body mechanics gave him an advantage in learning to dance.  After his first few lessons he was hooked, and soon after was asked to join the Salsa Con Sabor performance team.  Several years later he and his dance partner Carolina started teaching and performing under their own company Ritmo del Alma.  Jamal won several local Jack and Jill Salsa and Bachata competitions in Portland.  He has also performed a solo at the Vancouver BC Salsa Festival, Seattle Salsa Congress, Rose City Salsa Festival and at Club Cache in NY.  Ready to increase his talent, he moved to New Jersey to train and perform with Caribbean Soul Dance Team while acting as assistant director for the team.  As a dancer he is known for his body movement which is influenced by Afro-Cuban and Hip Hop.  As a teacher he is known for being very patient and being able to explain complicated concepts in a simple way.

Upon returning to Portland Carolina and Jamal decided to follow their dream and open VMAC, making sure to focus on growing an inclusive community in a space that people could call home. 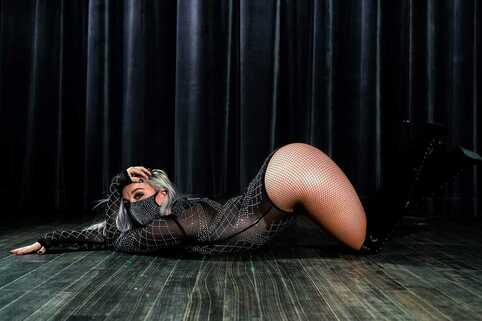 Deblin McKnight is one of the co-owners at VMAC and lives for dance. Deblin joined VMAC shortly after it opened and immediately fell in love with the community and environment. She joined teams and continued to thrive on and off the stage. Currently, Deblin operates the Zouk & Bachata program at VMAC. She focuses on social dancing technique and knows how to lead and follow.

In addition to teaching classes and directing performance teams, Deblin participates heavily in community building. She is a board member of the Rose City Salsa & Timba Festival, Director of Eclipse Zouk Marathon, and Co-Operator of PDX Bachata. In addition to major events, she also organizes Weekender events that focus on a specific artist and their style. She enjoys teaching, training and hiring other amazing artists to grow the dance community in Portland.

Bruce Smith
(Instructor: Zumba fitness and African dance)
​
Bruce’s love for music and dance is an extension of his family environment growing up. He is a former member of the Nationally known R&B recording group “Pleasure”. He was the Founder, Artistic Director and Choreographer of the International Touring Dance Company, NW African American Ballet. Bruce was on the curriculum writing team for the Vancouver School of Arts and Academics. He created the African dance curriculum for Jefferson High School Performing Arts department and taught that curriculum at Jefferson for 15 years. While at Jefferson, he choreographed four African dances for the Jefferson Dancers. Bruce has been teaching Zumba since 2012. 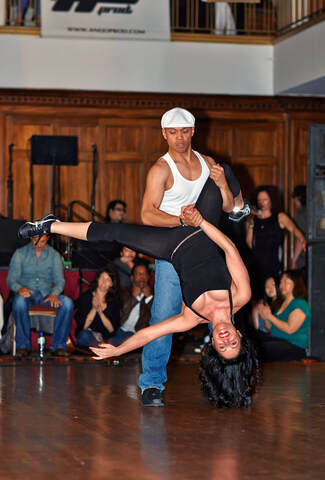 Rob Hilario
(Instructor: Casino)
​
​Rob started his training in Casino (Cuban-style partner dance) in September 2005 in the Bay Area, Rob is an original member of Salsa Vale Todo in San Francisco, CA; starting in 2007, and parting ways with the group in 2011.

Often described as having "super clean" and "flawless" technique, Rob is thoroughly well-versed in calling and choreographing Ruedas (the group form of Casino), as shown in recent performances youtube.com/watch?v=H_RDJo-HrOA

However, Rob's true strength is his mastery of partnering technique, angles, handwork, and footwork to make social dancing enjoyable for follows as well as leads.

Relocated to Portland in April 2012, Rob is eager to share his knowledge of Casino with the Pacific Northwest. He is thrilled to join a community of dancers he highly respects and has a long-standing friendship with. 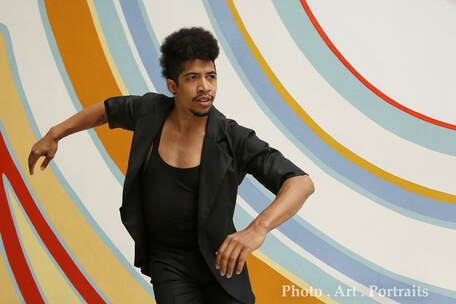 ​Originally by way of  New York, Malik Delgado draws his inspiration from HIs Afro American and Afro Caribbean origins. As a student/performer of street dance helping to form local crews like Portland City Rockers and Soul Trigger PDX,  Malik’s journey has led him to immerse himself into many cultures from B-Boying, to Popping/Boogaloo to Krump. Simultaneously never thinking his Love for movement and artistic expressions would lead him embrace Salsa, American Style Ballroom, Afro Latin Fusion. by sharing his street dance education with local schools and programs, Malik has been inspired by how effective dance has been in inspiring his community and continues to Perform, Teach an educate in hopes to continue the traditions that have given so much to his life and the lives around him.

He believes what defines us is the work we do to uplift and learn from each other as a local and global community. Through education, celebration, and sharing our experiences we can indeed grow through our past and present life challenges and successes. The healing that comes from its work is limitless in its potential and its benefits. 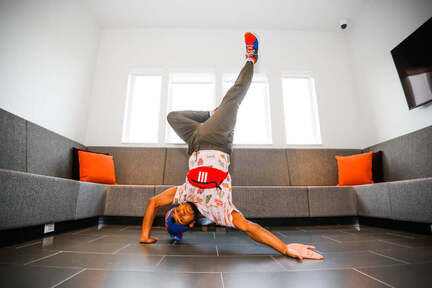 "Walle Brown is a dancer from Atlanta, Georgia who loves breaking (breakdance), house, locking and other styles. He is most well-trained in breaking and house, and incorporates both within his teaching style. He has been breaking since 2010 and has grown in experience throughout a medley of self-teaching, short-term mentors and international workshops. He has been featured in music videos like "The Mellow by The Clinician" and has won individual underground competitions like "Ultimate Dancer 6" (Atlanta, Ga). He has also taught dance throughout many academies like the Honey Rockwell Dance Academy, BeDance (ATL), The Space (ATL), Georgia Tech University (ATL), Portland State University (PDX) and to children in South Korea. His dance philosophy is centered around dance as a means of expression and, therefore, communication. Beyond movements, he focuses on establishing a strong, reliable, foundation for his students so that they have the tools to build their structures and combinations through a shared vocabulary. Respecting students as individuals is key to his teaching praxis because "different bodies have different needs". In his classroom, it is less about looking the same and more about speaking a common language - having a shared vocabulary of movement. He loves teaching and watching dancers grow! His class and teaching style are approachable and open to all who are ready and willing.^_^ 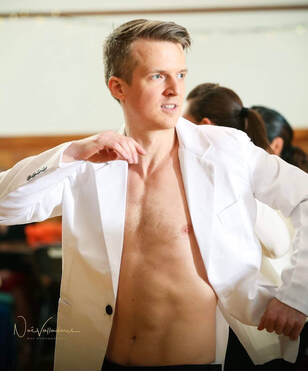 Branden began dancing salsa in 2010. Training in New York with Eddie Torres, Franklin Diaz, Ismael Otero and many more he has a deep understanding of salsa, on2 and on1,  timing, music and technique.

When Branden moved to Portland in 2015, he promptly connected with Carolina and Jamal at Vmac to continue to study salsa on2 with a focus on social dancing. He joined the salsa on2 performance team and became team captain after one year of training and began teaching shortly thereafter.

In addition to dancing, Branden is a professional drummer, has toured extensively playing shows across the globe and is multilingual with fluency in Spanish.

​Tara has been training as a salsa dancer and instructor at VMAC since 2015. She quickly became enamored with salsa on2 after taking only a few lessons with Carolina & Jamal and continued to train and perform with four of VMAC's salsa teams as well as with Baila Ladies dance team directed by Dahiana Oliver. Tara has also trained in New York, which sparked her passion for social dancing. Her love for salsa extends to the history of the music, culture, and dance. She continues to train, perform, and teach at VMAC and enjoys both leading and following on1 and on2 salsa. 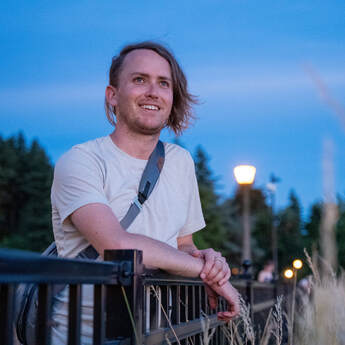 Chris began dancing Brazilian Zouk at VMAC in 2017. Having started their dance journey with Salsa and Bachata in North Carolina, they found zouk while exploring other dances and immediately fell in love with the organic, flowing, and beautiful nature of the dance. Quickly leaving most (all) other dances behind, they dove headfirst into studying and training in zouk, and more recently Lambada, from which zouk was born.

After transitioning into a teaching role this year, Chris has developed an even deeper appreciation and understanding of Brazilian Zouk that they hope to share with anyone and everyone interested in trying this amazing dance. 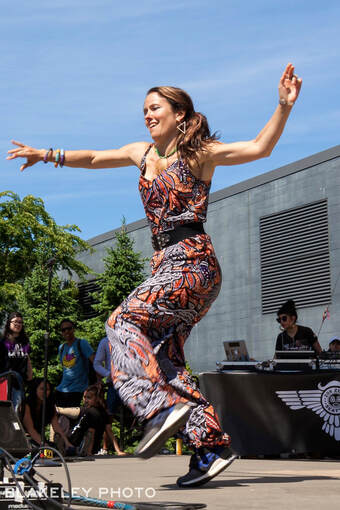 ​Donna Mation, performance artist, choreographer, and educator, is the artistic director and choreographer for Axé Didé Afro-Cuban and Brazilian Music and Dance Co., and Bang Bang Boogie. DonnaMation specializes in club and street dances from the USA including, Hustle, House, Popping, and Hip Hop as well as sacred and secular dances of Cuba and Brazil.  She has performed and taught in various places around the world. Donna has danced most of her life and began her career as a performer and educator of dance in 1999.
Donna’s love of both the deeply rooted sublime dances of the Orisha as well as the infectious groove of street dance from the U.S. has led her to a creative process combining the rich culture of hip hop with the intricate movements of Afro-Cuban dance: Afro-Cuban Hip Hop.  In Portland, she has developed a university-level course “From Mambo to House” that investigates the connection and lineage from Cuban Rumba through salsa, hip-hop and house dance. When she is not on the road teaching, learning, or performing, Donna offers Full length themed production’s and small shows as well as community classes at various studios in Portland OR and credited courses at local colleges and universities.
​As an Artist Donna is appreciated for her vibrant presence and ability to create a verity of feelings within the audience. Donna has performed in many awesome groups as a dancer, director, and percussionist including Rennie Harris Pure Movement, Omo Ire, Jujuba, The Lions of Batucada, New Lineage, and Black Angel. As the artistic of Axé Didé, Donna masterfully combines rhythms and dances mainly from Cuba and Brazil, but also from the diverse lineages of the African Diaspora.
As a teacher, Donna is known for her enthusiasm, passion, and respect for the origins of the many styles of dances she shares.  Her classes are an education in history as well as a challenging workout for people with all levels of experience.  Donna inspires and supports her students to further embody movements and understand story telling through character, not just imitate form.
Donna studied at the Univeristy of Matanzas Cuba with Grupo Afro-Cuba and Los Muñequitos de Matansas after being introduced to Cuban Folklore by Teresita Domé Perez in 1997, who later became one of Donna’s mentors.  Donna later studied extensively with Juan de Dios, director of the world renoun group Raices Profundas of Havana Cuba. Donna’s interest in Orisha/Orixa dance led her to intensive studies with Jorge Alabe and  Rosangela Sivelstre  in Brazil.
Donna performed as a principal dancer with Juan de Dios, director of Raices Profundas, and Miguel Bernal, former lead percussionist of Raises Profundas, in their USA based group Omo Ire.  She has also had the great opportunity to perform with Jorge Alabé in several performances, and worked as a performer and choreographer in a show with the world renowned creators of Bata Ketu, Michael Spiro and Mark Lampson.